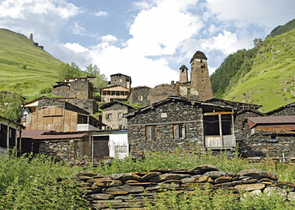 For the first time in Czech nature conservation history, the Nature Conservation Agency of the Czech Republic in co-operation with the Krkonoše/Giant Mts.

National Park Administration has been involved in a development co-operation project in Georgia, namely in a unique protected area in Tusheti,KakhetiRegion, Akhmeta District. The activity is supervised by the Czech Development Agency and funds are provided by the Ministry of Foreign Affairs of the Czech Republic. The project deals with development of a management plan (MP) to be implemented pursuant to the national legislation in the six-year period (2014–2019). Its structure follows the IUCN methodology. In ten chapters, it presents the basic information on the area, describes its cultural and natural values, sets basic aims and targets, analyses problems including threats to nature and proposes a wide range of measures to be taken. The MP also provides indicators that should be used to monitor and assess its implementation. A proposal for different management zones for the Tusheti Protected Landscape (TPL) is an important MPs part: it is based on natural values of the area as well as on its long-term use by local people and also takes into account the adjacent Tusheti National Park and Tusheti State Nature Reserve. Czech experts delineated four zones: i) Zone of strict protection (13.3% of the TPLs territory), ii) Zone of traditional use (86.1), iii) Cultural/historical zone (0.3%) and iv) Sustainable use zone (0.3%). For each of them, main tasks and “the rules of the game” including activities to be permitted and prohibited were proposed. The MP also includes the so-called Action Plan, in detail describing activities to be considered as priorities by the TLP Administration during the first two years of its implementation. The MP was widely discussed with Georgian partners, finalized in October 2013 and now is waiting for its approval by the Georgian Ministry of Environment.