The Poseidon – the Longest European System of Underground Spaces in Sandstones 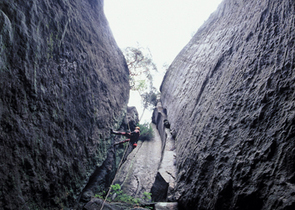 The Poseidon system was discovered by Roman Mlejnek during speleo­logical survey in 2006.

A complicated pseudokarst system is located in the central part of the Teplice Rocks (north-eastern Bohemia). Its main character is complicated, interconnected labyrinths of deep fissures and open gorges, caused often by vertical sensitivity to creating fissures in ashlar sandstones. Caved-in grounds often fill particularly broader fissures. Clinched rock blocks and broken stones situated consequently on them form up to multi-storey cave spaces, reaching many meters in the depth. In the direction North-South, the Poseidon system is 740 m long, being at the same time in the crosswise direction 550 m wide. The fissure labyrinths and abysses cover more than 41,500 m2. Broken stone caves formed in separate broken stone accumulations cover approx. 26,800 m2. The total length of the underground spaces accessible for humans is at least 27.5 km of them 19.5 km are fissure labyrinths and abysses. The length of the underground spaces in broken stone accumulations is at least 8 km. The system is a unique speleological phenomenon not only because of its geomorphology, but also of its specific microclimate, occurrence of specific plants and invertebrates as well of numerous occurrences of root formations, particularly of root stalagmites. At present, particularly cryophilous invertebrate species, of them many can be considered as glacial relics have been reported there. They include spiders Sisicus apertus, Bathyphantes eumenis, Diplocentria bidentata and Oreonetides vaginatus, mountain ground beetles Trechus striatulus and Carabus sylvestris sylvestris and the rove beetle Leptusa flavicornis. The occurrence of Nordic predatory mite Rhagidia gelida really is of extraordinary significance.