Plesník J. & Hošek M.: The Fifth World Conservation Congress: A Suspicion of the Shadow or Memories 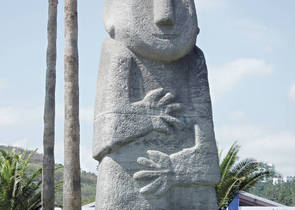 The Fifth World Conservation Congress (WCC), organized by the IUCN, the International Union for Conservation of Nature, was held on Jeju, South Korea, 6–15 September 2013.

The IUCN is the world’s oldest and largest global environment network, putting together 92 governments, 125 governmental institutions, 107 international NGOs and 900 national NGOs as well as 43 affiliate members. The congress was attended by almost 11,000 participants from 164 countries. Due to Jeju’s outstanding natural beauty, geomorphological phenomena and landscape scenery, parts of the picturesque island became a UNESCO Biosphere Reserve, World Natural Heritage site and a Global Geopark. In 2011, the whole island was selected as one of the Seven Wonders of Nature by on-line voting of the people all over the globe. Traditionally, the congress consisted from two parts, the Forum and Members’ Assembly. The Forum, a hub of public debate bringing together people from all walks of life to discuss the world’s most pressing conservation issues, dealt with key nature conservation related issues, e.g. climate change, food sustainability, green growth, poverty alleviation, protected services effectiveness, ecological restoration or the concept of ecosystem services and payment for them. The progress in IUCN’s flagship activities such as the Red List of Threatened Species or protected areas categories was also presented at the WCC. During the Members’ Assembly, the highest decision-making body of the IUCN, i.a. 137 motions on various nature conservation and sustainable use of natural resources across the world were adopted after they had been debated. The authors debate whether it is useful to think of changing the way how the IUCN operates to better reflect changes both in human society and natural word.