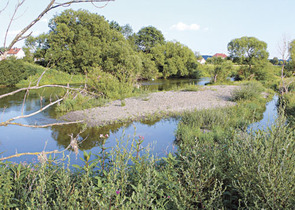 In northern Bavaria, Germany, on an upper, unnavigable stream of the Main River, the Water Management Office based in Kronach has been implementing a rather broader programme aiming at improving morphological and ecological character of the river as well as at introducing close-to-nature flood prevention, protection and control measures.

In 2000, as a part of the programme, the office made the Main River bed near Ebensfeld 2.6 km in the length more natural.The river had partially been canalized in a paving in the 19thcentury. Due to limited possibility to purchase or exchange suitable lands and high costs supposed, a measure fully restoring an original natural riverbed was not feasible. Therefore, the Water Management Office applied in some extent a compromise: the river was made more natural only in the stretches where the lands were obtained from owners. At those sites, the measures were taken in a very go-ahead manner, similar to a huge flood. On former fields, the office removed to a great extent fertile soil layers. Thus, less fertile gravel substrates became naked. The measure which also included creation of small islands, inlets and coves would start a spontaneous morphological development in the riverbed. The approach applied there shows both water management and ecological effects: dynamic capacity of the riverbed to store water has increased and ecologically valuable shapes and surfaces in the riverbed have been restored. Experience in making the Main River near Ebensfeld more natural can be used also in less demanding water stream restoration in the Czech Republic.