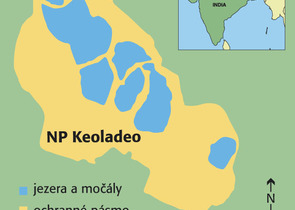 One of the finest bird parks in the world, the Keoladeo Ghana National Park located in Bharatpur, eastern Rajasthan was established in March 1982, covering 28 km2.

Keoladeo, the name derives from an ancient Hindu temple, devoted to Lord Shiva, which stands at the centre of the park. ‘Ghana’ means dense, referring to the thick forest, which used to cover the area. While many of India’s parks have been developed from the hunting preserves of princely India, Keoladeo is perhaps the only case where the habitat has been created by a maharaja. In earlier times, the town of Bharatpur used to be flooded regularly every monsoon. A green wildlife oasis situated within a populated human-dominated landscape harbours a mosaic of dry grasslands, woodlands and man-made and man-managed wetlands. A system of small dams, dykes, sluice gates, etc.,was built to control water level in different sections in the late 19thand early 20thecentury. This became the hunting preserve of the Bharatpur royalty, and one of the best duck - shooting wetlands in the world. Hunting was prohibited by the mid-1960s. The principal vegetation types are tropical dry deciduous trees, intermixed with dry grassland in areas where forest has been tainted. Apart from the artificially managed marshes; much of the NPs area is covered by medium-sized trees and shrubs. The aquatic vegetation is rich and provides a food source for waterfowls. Over 370 bird species have been recorded in the park. The major attractions of 100,000 tourists annually visiting the park are the numerous migratory birds, which come from as far away as Siberia and Central Asia and spend their winters in Bharatpur, before returning to their breeding grounds. The protecte area was the only regular wintering area in India for the globally Critically Endangered Siberian Crane (Grus leucogeranus). The major threats to the Keoladeo National Park, a UNESCO World Heritage Site, include the water supply (both quantity and quality); invasive alien species, e.g.the Water Hyacinth (Eichhornia crassipes), and inappropriate use of the National Park by neighbouring villages.