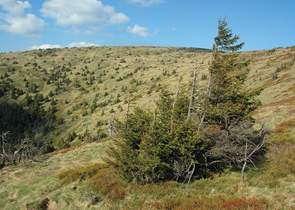 The document has not yet been submitted for comments by the other sectors and is intended to initiate much-needed discussion of the issue. Resulting from climate change, the Czech Republic will be confronted by unfavourable impacts on the environment and human well-being. Consequently, it is necessary to adopt mea­sures that will keep climate change within the acceptable limits (i.e.mitigation measures). However, certain changes have been already inevitable. Thus, it is important to also devote attention to adaptation measures that will enable us to adapt to climate changes in the future, e.g.increa­sing the ability of the landscape to maintain water because of the more frequent occurrence of extreme precipitation. While the Policy responds particularly to the urgent need to stabilize and reduce greenhouse gas concentrations in the atmosphere, comprehensive strategy of adaptation to climate changes is lacking, and thus it is necessary to adopt a national climate change and human adaptation strategy or programme (cf.Plesník & Pelc 2009).

At the global scale, the Czech Republic, with 146 million tonnes of CO2equivalent1annually, ranks 35thposition by the absolute amount of greenhouse gases, with approx. 0.3 % of total global emissions. Nonetheless, in relation to the amount of emissions per capita or gross domestic product (GDP) unit, it is one of the countries with the most emission intensive GDP production. The per capita annual emissions reach 14.2 tonnes and are by 35 % higher than the EU average and seven times higher than in India. The energy sector produces 40 % of total emissions in the Czech Republic, caused particularly by the high proportion of fossil fuels in the energy mix and significant export of electricity. The higher proportion of greenhouse gas emissions coming from industry (32 %) reflects the structure of industry and its greater proportion in GDP. The remaining emissions come from transport (12 %), fossil fuel combustion in buildings (8 %), agriculture (6  %) and waste management (2 %).

The commitment of an eight percent reduction in aggregate greenhouse gas emissions by 2012 compared to the year 1990 for the Czech Republic comes from the 1997 Kyoto Protocol to the UN Framework Convention on Climate Change. The Protocol which entered into force in 2005 was ratified by the Czech Republic in 2001. For the Czech Republic and most of Central and East European countries, the Kyoto target can be met without active climate protection due to the fact that their national economies underwent fundamental restructuring, as a result of economic transformation, former industrial polluters either closed down or step-by-step converted production to more recent low-emission technologies.

The Kyoto Protocol to the UN Framework Convention on Climate Change established the first legally binding commitments for greenhouse gas emission reduction for “Annex I” (industrialised countries), for the period 2008–2012 (UN 1998). Having become a Party to the Kyoto Protocol, the Czech Republic committed itself to an eight percent reduction in greenhouse gas emissions compared to the year 1990. At the present time, global negotiations have been in progress to develop a new global agreement to protect the climate, which is to be adopted at meetings of the Confe­rences of the Parties to the UN Framework Convention on Climate Change and the Kyoto Protocol in Copenhagen, Denmark, in December 2009.

Climate protection is also one of the priorities of the European Union’s common policy. The climate and energy package of December 2008 is intended to provide for reduction of greenhouse gas emissions in the EU by up to 30 % compared to the year 1990 (Commission of the European Communities 2009a). This target is to be achieved primarily through the European Union’s Emission Trading System (EU ETS), a higher share of renewable energy and increased energy efficiency. Therefore, the Czech Republic should substantially reduce greenhouse gas emissions in sectors included in the EU ETS, such as energy industry and industrial branches (metallurgy, chemical industry, lime, cement, glass and ceramics production) and in sectors not included into the EU ETS (transport, housing and building construction, agriculture and waste ma­nagement), to not increase emissions in the other sectors by more than 9 % compared to the 2005 values (Mini­stry of the Environment of the Czech Republic 2009).

The climate change is one of the main priorities of the Czech Republic during its Presidency of the Council of the European Union.

Targets of the Climate Protection Policy in the Czech Republic

At the present time, the Czech Republic is producing 22 % less greenhouse gas emissions than in 1990. We should confess to the fact that we can do more for climate protection than only to be satisfied with the target having been automatically met. Therefore, the Policy should significantly contribute to this; it is based on an active approach to climate protection with clear targets and on developing tools and instruments, through which the targets can be met (Table 1).

The climate and energy package includes an obligation for the Czech Republic that greenhouse gas emissions outside EU ETS will not exceed +9 % compared to emissions in 2005 (Commission of the European Communities 2009a). As approximately two thirds of the production of greenhouse gases in the Czech Republic have been under the tra­ding regime, the commitment applies to one third of emissions (see Box on p. 26).

The scenario of greenhouse gas emission reduction is projected towards 2020. The Policy aims at describing effective measures and procedures and, where appropriate, it suggests modifications, but it does not intend to replace other policies. The Policy’s main goal is to set the conditions under which the climate protection criteria will be fully integrated into other sectoral policies and into every day decision-making by the public administration.

Potential consequences of the Policy are presented in Fig. 1. Using the existing tools and instruments, the Policy can contribute to their more effective use as well as to proper and in timely manner implementation (the lower, darker part of the column). Tools and instruments that are an integral part of active climate protection policy or their consequences are denoted in the upper part of the figure. Possible achievement of greenhouse gas emissions savings varies between 0–30 Mt and, in practice, will most pro­bably range between 20 and 30 Mt.

To illustrate the above principle, an exam­ple is given of predictions for electricity production from renewable resources in the Czech Republic and the impact of the Policy on the production (see Fig. 2).

The Climate Protection Policy of the Czech Republic applies approx. 30 measures, which are developed to cover most of the aspects of life and activities in the Czech Republic in a reasonable and cost effective manner. They deal with industry, the processes of energy conversion and distribution, final energy consumption, transport, agriculture and forestry. Selected measures cover most of the greenhouse gas abatement potential in the given period.

The main measures include among others the following:

Compared to some other countries, the Czech Republic has a relatively large capaci­ty for reducing greenhouse gas emissions by retrofitting the end-of-life coal-fired power plants. Because of geographic conditions, it has less potential for development of renewable energy resources, such as wind or solar energy.

In addition to classification by sectors, the measures can also be classified by the costs for society. Primarily, there are the mea­sures with net economic benefit, e.g.those increasing the energy efficiency of buildings, industry and transport. The costs of their introduction are more than compensated by savings from lower energy consumption. Other measures, such as greater utilization of renewable energy resources, require higher expenditures. Although the costs are quite high compared to other possibilities, develo­ping the renewable sources of energy in the private sector is effectively promoted by attractive feed-in tariffs. The renewable energy utilization is also desirable from the standpoint of energy security and regional deve­lopment.

Costs for the Policy‘s implementation

The annual costs of implementation of all the measures in the Policy are estimated at EUR 700 million at current prices (CZK 21.6 billion) in 2020. The figure will correspond to approx. 0.3 % GDP and will be accepted by the market to a major degree (costs will not be explicitly as “climate protection” ancillary expenses).

The theory and practical experience have shown that implementation of measures to mitigate greenhouse gas emissions does not fundamentally burden the national economy – either private entities or the public sector – by ancillary costs. The measures can often be implemented using the (properly) employed existing instruments, their modification respectively. If, in addition, other entities and as well as other countries set the similar targets, then there is practically no burde­ning of the economy. In addition, it should be taken into account that almost all mitigation measures are far less costly and have more positive and simultaneous effects than adaptation measures which shall cost far more in the future, if the current global trend in increasing greenhouse gas emission is not stopped and consequently reversed.

In April of 2009, the European Union published the White Paper.Adapting to climate change: towards a European framework for action(Commission of the Communities 2009b). In addition to the measures mentioned in Table 3, long-term strategic measures are also relevant for the Czech Republic, such as:

The Climate Protection Policy of the Czech Republic is based on realistic numbers and assumptions and its targets, although they may seem ambitious, are achievable. This is particularly true because the approach to protection of (and adaptation to changes in) the climate has not been very active but rather passive in the country yet.

However, it will depend on the approach taken to implementation of the already exi­sting tools and instruments, their modification respectively and how actively each of us promotes their implementation. Therefore, the Climate Protection Policy includes a separate part providing instructions on what each individual citizen can do to protect the climate.

The author is Director of the Department of Climate Change at the Ministry of the Environment of the Czech Republic Prague.