Focusing on the Public

The Elbe Canyon is unique not only for its landscape and natural values, but also represents a huge potential for tourist and recreational use. While the German side realised this long ago, on the Czech side there is still an effort to transform the Elbe into an industrial transport channel. The history of tourist use of this landscape dates back to the 19th century, when one of the oldest tourist associations in Europe was established, and the Elbe Canyon became the cradle of European and world tourism together with the Alps. The fascinating landscape of Bohemian-Saxon Switzerland inspired renowned romantic artists. Today their works and later old postcards can tell us about the natural appearance of the Elbe.

Cradle of tourism
The Bohemian Switzerland Mountain Association (Gebirgsverein für die Böhmische Schweiz) was founded in Děčín as early as 1878. Thanks to the association and the owners of the local Clary-Aldringen and Kinský estates, the most beautiful destinations, such as the Pravčická brána Arch and the Kamenice Gorges, were made accessible in the wild landscape, attracting tourists from all over the world. On the Saxon side, the discovery of the landscape by tourists dates back to an earlier period, as this historic act is considered to be the moment when the farmer Adalbert Hauff provided accommodation to the first holiday-makers in today’s resort of Kurort Göhrisch as early as 1869. Thanks to its proximity to Dresden, Saxon Switzerland became a very popular area for visitors. Already around the year 1800, tourists began to visit Bastei, the most visited destination in Saxony, where a massive stone bridge was built for tourists in 1850–1851. Today, with a visitor rate of about 1.5 million people per year, Bastei is the most visited place among all national parks in Germany. The Bastei Bridge offers breathtaking views of the surrounding rock labyrinth and the panoramic terrace near the tourist hotel offers spectacular views of the Elbe river. It was this view of the unfettered Elbe and its surroundings that inspired the artists of that time most of all. 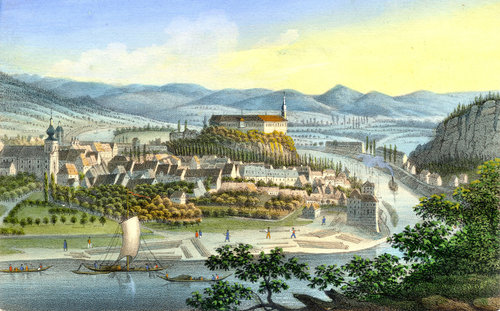 The first conservationists
Tourist use of the landscape of Bohemian-Saxon Switzerland increasingly became a source of livelihood. So a century ago, the locals began to realise the need to protect the local nature, where many natural rock formations in the Elbe Canyon were irreversibly destroyed by sandstone quarrying. Therefore, on 31st March 1910, the Saxon Switzerland Protection Society (Verein zum Schutz der Sächsischen Schweiz) was established. Its mission was to preserve the unique local nature and above all, to stop the quarrying. By 1917, the association had managed to purchase most of the quarries, preventing further destruction of the landscape. Similarly, tourist associations bought up dilapidated historical monuments and saved them in order to increase the attraction of the area for tourists. For example, the castle above the town of Wehlen was bought in 1882 by the Saxon Switzerland Mountain Association, which set up a vantage point here. Even today, it is clear that the preservation of nature is not only a concern for state nature conservation, but also for the local residents for whom tourism provides livelihoods, and for tourists who come here to admire the unspoiled nature. Therefore, the local history suggests that the potential of tourism income here far exceeds the real income from the Elbe as an industrial transport route.

Romantic inspiration as a commitment for the future
The mysterious attraction of the landscape of Bohemian-Saxon Switzerland has always tempted man to discover and portray it. It is no coincidence that centuries ago famous artists found inspiration here. The classical composer Carl Maria von Weber set the story of his opera ‘Der Freischütz’ (The Marksman) here and the territory also captivated Hans Christian Andersen and Johann Wolfgang Goethe. After all, it was the Swiss painters Adrian Zingg and Anton Graff, based at the Saxon Royal Court in Dresden at the end of the 18th century, who apparently named the area Saxon, and later, Bohemian Switzerland – they were so enchanted by the area that they named it after their homeland. 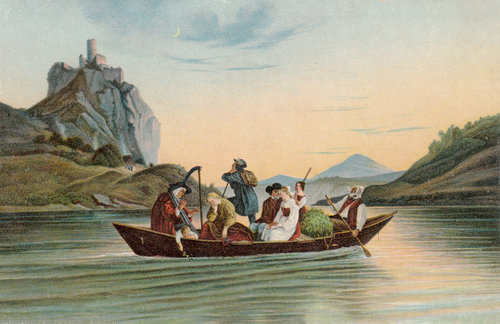 Historical postcard according to painting by Ludwig A. Richter, Ferry
below Střekov (Überfahrt am Schreckenstein), original from 1837.
Archive Zdeněk Patzelt

Visitors can see the unique collection of many beautiful works of art from the Hasse-Stiftung Foundation’s collection at the Saxon Switzerland National Park Administration in the gallery at Bastei. Many of the depictions of the Elbe Canyon of past centuries show how the river was full of life and small boats creating dense traffic. The artistic rendering of the landscape of Bohemian-Saxon Switzerland compels us to preserve its values for the future. 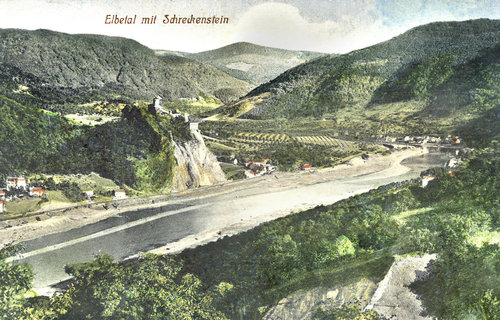 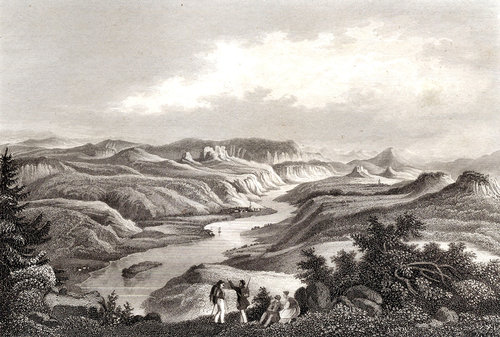